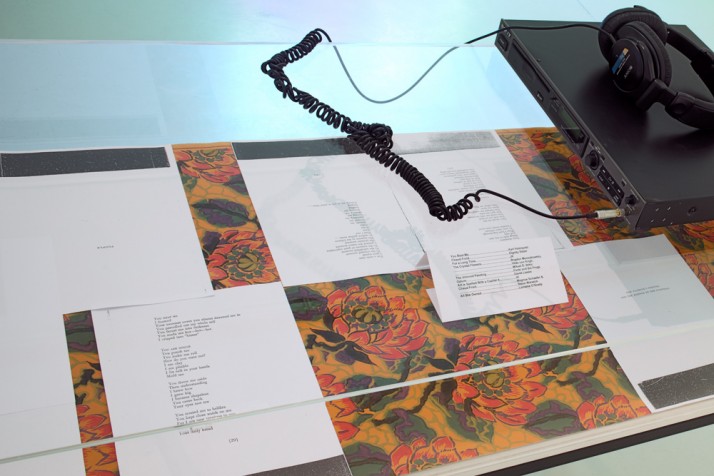 The exhibition brings together five artists whose practice is focused on the production of pictures – pictures that refer to things biographical or social, that are fed by referentially charged and at the same time personal sensitivities and formal interests. Thus, these pictures always either implicitly or explicitly insist on an understanding of subjectivity that displays its historically and socially determined nature.

Nick Mauss’ contribution is as it were a bracket here. It refers to the poems of the American painter Florine Stettheimer (1871 – 1944), published in 1949 in the volume Crystal Flowers. In her paintings, Stettheimer shows scenes from the social life of the New York avant-garde from the 1910s to the 1930s, whose idiosyncratic qualities are also to be found in her poems, which are, as Mauss states, “stylized, ornate, jazzy, sharp, wistful, sugary - the poems jubilantly synthesize in Stettheimer's unmistakable tone the pleasures, pangs, and aspirations of a life in culture.” For the album Crystal Flowers, which will appear later this year and from which Mauss presents several titles, he invited several artists to take texts by Stettheimer as points of departure for musical pieces of their own, making the poems appear in the present, but refracting them as if through a prism of “other voices.”

An echo of the kind of figuration that Stettheimer engaged with at the time of the historical avant-garde can also be traced in Katharina Wulff’s painterly practice, which since the 1990s has linked itself repeatedly to lines of tradition of figurative painting, which in the historiography of modernism have been assigned to the margins. For the exhibition, Katharina Wulff designed a glass window that transfers the close joining of figuration, interior, and décor, which plays a role in many of her paintings, to the exhibition space.

In a similar way, Lukas Duwenhögger refers in his painting to traditions of figuration that sometimes have conservative connotations, which he however subjects to a queer re-reading. His film From Cotton via Velvet to Tragedy (1991), shown in the exhibition, develops this perspective in a different medium – using images with saturated colours and a great deal of detail, Duwenhögger develops a plot which reflects gay culture and identity between specific aesthetic sensibilities, the AIDS crisis of the 1980s, and seemingly absurd attempts at revolt. Like Katharina Wulff’s glass window, Birgit Megerle’s clothes, painted and sprayed with décor forms, entangle an experimental painting practice with “applied” design. The stylized black-and-white photographs take up this overlay and expand it in a series of scenes where a male model wears a top painted by Megerle into a fragmentary, “floating” narration.

Amelie von Wulffen’s watercolours avoid a directly identifiable look in favour of seemingly disparate styles between cartoon-like depictions, art historical references filtered through popular graphic design, and scenarios reminiscent of (day)dreams. They have an innate, emphatically subjective dimension which is, however, not so much expressive, but rather invokes a subjectivity that is permeable for external influences. In terms of motifs and themes, the works chosen for this exhibition circle around the 1950s in Germany with their specific, “icky” atmosphere, as von Wulffen puts it.