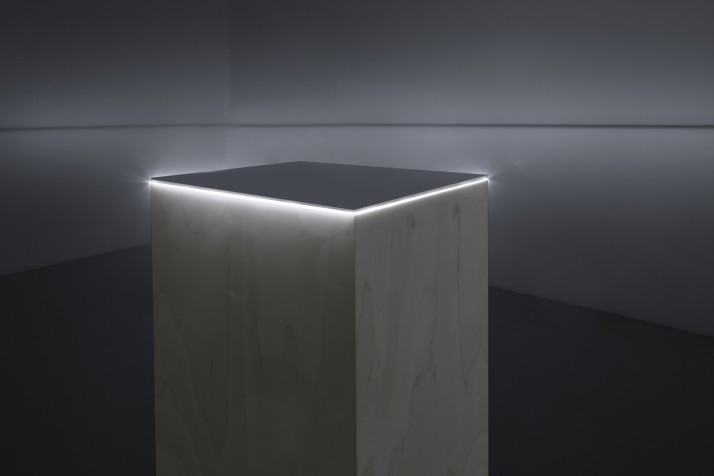 For her third solo show at Galerie Neu, Kitty Kraus blocked the doors and windows of the gallery space. In the front area and in the middle of the exhibition space, there is one vertical wooden box each, covered with a pane of glass. Between the wooden pillar and the glass pane is a small gap. Both objects seem like self-contained entities. But this small gap allows us to sense that inside of the boxes there is a source of light. Even though one would think this would lighten the darkened room, all we can really see is a dark line, a shadow that is projected horizontally to the walls. Even if the thin gap would lead us to expect an equivalent light in the room, we see above all a narrow dark line. In this way, the darkness of the room is absorbed and reflected through the gap. It seems as if the object were reflecting itself into its negative. And more: it manages to encompass the room in its entirety, divide it, and materialize it. Taking the formal vocabulary of minimalism as a point of departure, Kitty Kraus uses simple everyday materials for her fragile objects. In contrast to the minimalist artists of the 1960s, however, it is clear that here the point is not a formal smooth superficiality of the materials, but rather a visualization of thoughts, a dematerialization of material. Although the physical presence in the space plays an important role, it expands into the ungraspable. Like her glass sculptures and mirror lamps, Kitty Kraus’ new light work, displayed in the gallery, is characterized by an intentionally formal rigor, but at the same time also by its dissolution and/or destruction. While in earlier works, the mirror lamp burst or the ice block melted, here the light, coming from the inside of the pillars, is consciously dispersed, until the gaps and voids, which in our everyday perception seem to tend to slip away, stand out.