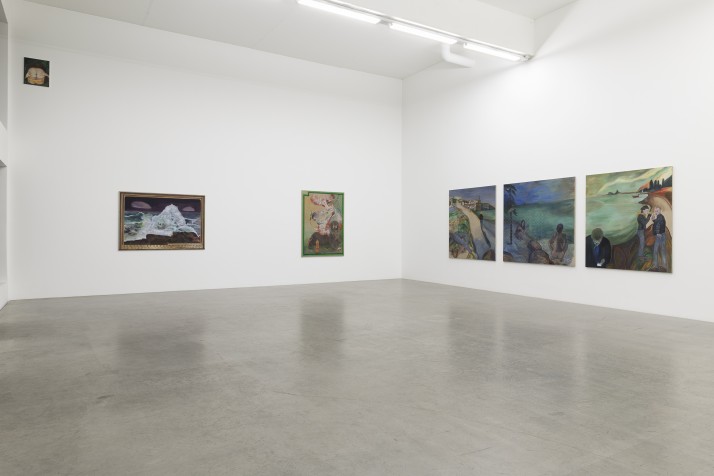 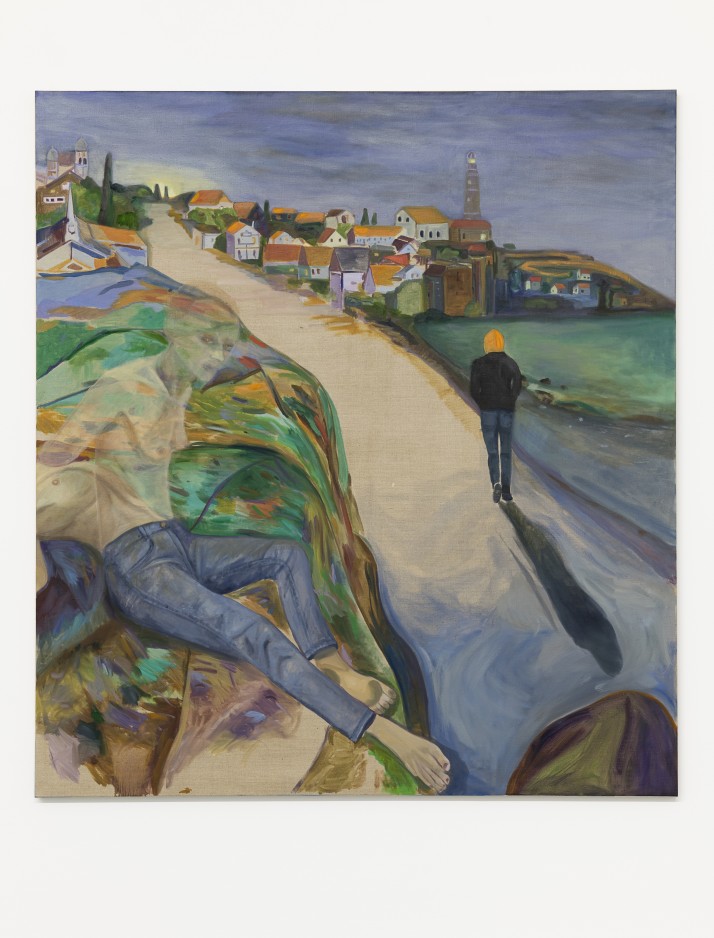 Water is life, but water is certainly also death. I have a friend, Agnes, who used to work on a rig. When I saw Jill Mulleady’s new paintings and read her show title “Mouth-to-Mouth,” I gave this friend a call. I ﬁgured the paintings were not only about water (big theme), but also about drowning, ﬁguratively speaking, perhaps, but also really. I wanted Agnes to re-tell her story about how it feels to drown; she almost died once. Dressed in an overall she fell in and went under, in the North Sea.

Your instinct not to breathe underwater, Agnes told me, is initially stronger than the body’s fear of not getting oxygen. To be trapped between these two opposing impulses produces an agony so violent that it can only be described as feeling the weight of death itself.

After a couple of minutes the carbon dioxide levels in the bloodstream surpass the oxygen levels, and the brain is chemically triggered. It forces upon you a shock inhalation, underwater or not. My friend quoted Sebastian Junger here: «It’s sort of a neurological optimism, as if the body were saying, Holding our breath is killing us, and breathing in might not kill us, so we might as well breathe in.» This is called the ‘breaking point,’ and now your lungs are ﬁlled with water.

Agnes said that this forced inhalation occurred while she was still conscious, which was unfortunate, because breathing water is even worse than running out of air. She was in no position to ﬁght her way back up to the surface. The very process of drowning makes it harder and harder not to drown, she said: an exponential disaster curve similar to that of a sinking boat. So she sank, surrendering to the sea.

The ﬂuid world, the drop, the depths, bottomless, profound. The (weightless) space of the mollusks, the wrecks, the subs. Beisht Kione, Kraken, Jonah’s Whale, Cthulhu, Proteus, all the unseen beasts. The shapeshifters, the trauma (you name them, all those unnamable things). A wet grave.

I thought: Jill’s aquatic vistas might be drifting around here somewhere, in this liquid distress. She has dived off the deep end of representational painting and into the bile of the psyche. Are the paintings dreamy? Not really, the works are insomniac. With smutty colors and unpleasant strokes, a feeling of suffocation is spread onto the canvas. They are the lowered, they are the lowness. Washing up on Munchian shores where mental disorders make their afternoon stroll, a place we have all seen but never been to. (Robert Burton quipped that melancholy is «known to few, unknown to fewer.»)

The object of these oils is water. But water is a substance, not an object. A puriﬁer but also a transparent concealer. The spring (of life, youth) but also a carrier of germs, dirt, it’s everywhere, polluted, invasive, murky, wet. It makes hard categories drift. Marine creatures are slippery, transitional, sliding, like hypnagogic visions; phantoms as seen by a threshold consciousness — between wakefulness and sleep. What looks like cute eye-holes in the smiley face on the underside of a rayﬁsh are actually its nostrils (see Ensor, Soutine, Chardin, Boudin and William Merrit Case for still lifes with rays and skates).

So the eyes are nostrils. Bodily oriﬁces get confused. The real eyes are on the other side, on top. Or on the backside, according to one of Mulleady’s works, in someone’s anus. What can be seen from the blind angle of a butthole? The abyss? Is the rectum a grave? The extremes of the digestive system are coupled, swapped. The supposedly life-saving ventilation in Mouth-to-Mouth is unstable here, reversible. Whatever it is that might bring us back to the surface, up to life, might also send us down again, head first, tongue-to-shoulder, gill-to-gill, smoke-to-throat, ﬂap-to-head, see-through-chest, cock-in-sink, age-for-youth, view-of-ﬁre, cheek-to-rim, kiss-of-death, ass-to-ass.